Optically sorting onions with a click of the mouse 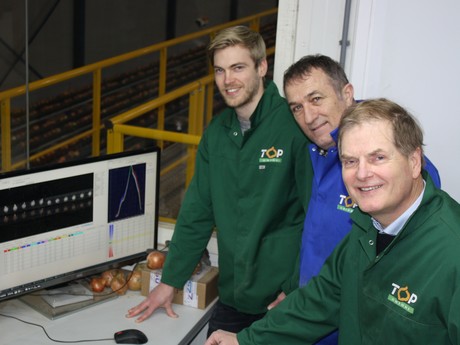 Supplying an even higher and more consistent quality of onions, that was the most important reason why TOP Onions chose optical sorting technology from JDC and Ellips/Elisam last year. The Dutch onion processor has now also experienced the labour-saving effect of the new machine. In the old situation, 16 people were working the processing line to process 25-30 tonnes of onions per hour, the new machine only requires five people for 24 tonnes. “And that doesn’t even include the saving on the number of people working on the follow-up check when packing,” says Erwin Bakker.

JDC supplies the new sorting solution, consisting of a camera system, a sorter and suction. The new sorting line has been in operation at TOP since September. However, those who think many onions have to traverse the belt in order to collect data, are wrong. “We already have that data, it’s in our algorithms,” Erwin says. “We have now realised 14 optical sorting projects in onions. In the Netherlands, optically sorting onions is still in its infancy, the technique is much more integrated in other countries. For example, in the US, retail customers have started demanding optical sorting. They no longer want rotting onions on their shelves,” says Bas Ruygrok. 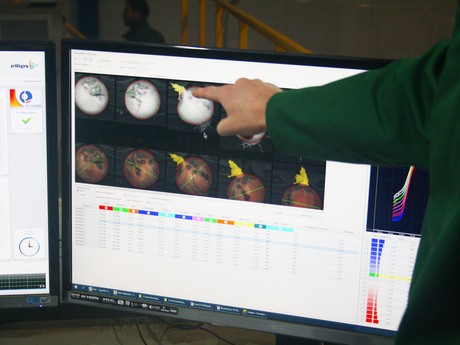 A look at the sorting line of TOP Onions shows us the cups in the machine are filled well. The screen indicates a load of 80 per cent and a capacity of 22 tonnes of onions per hour at an average weight of 100 grammes per onion. The onions with internal deficiencies disappear into a crate placed at the first exit, the onions with external deficiencies disappear into the second crate, and bare onions disappear into the third crate. The good onions disappear into the right sorting. “With one click of the mouse, the operator can adjust the parameters per batch. There are separate programmes for red and yellow onions. The role of the operator continues to be very important, they’re continually looking at the screen and at the onions. In fact, he decides which onions end up in which crate,” Bas says. 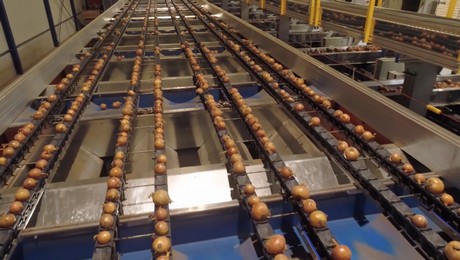 The four cameras make six images with colour and infrared, so 24 photos of each onion in total. Behind the screen, selections based on, for example, bareness, roughness or rot can be made for each onion. “It allows a company like TOP to sort out a batch with, for instance, fusarium much sooner than in the past, because it gives the certainty that the batch won’t be returned. When we supplied this machine, we gave our guarantee that less than two per cent of bad onions would end up with the good ones,” Erwin says. 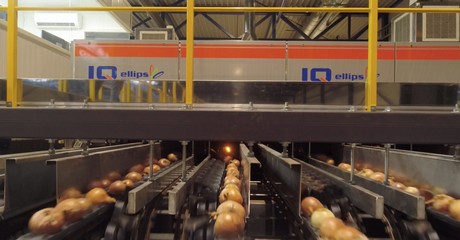 “TOP has this sorting technology as its primary sorting line since September, and they have now used it to process around 35,000 tonnes of onions. The advantage of the machine is that it can sort a consistent quality of onions at any time of day or night. The added value of this machine is the internal quality selection. With that, you can really be distinctive for your buyers. The most important difference with other suppliers is that seven years of experience of various onions and defects have been used to create the programme. While other systems start by collecting that experience, a JDC Ellips/Elisam system can immediately be taken into operation.” 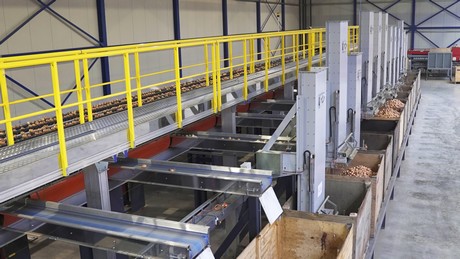 “In Scandinavia, they mostly decide to use optical sorting to save on labour. In Germany, the Netherlands and the UK, optical sorting is chosen to improve quality. For now, the Dutch onion sector is hesitant to start optically sorting. That allows companies like TOP Onions to further their position as a leading onion company. They can offer a guaranteed quality and higher supply reliability, while labour costs are lowered. Because of this, the investment can be earned back sooner, and you get a better competitive position in the near future. No time to waste, I’d say!” Erwin concludes.

Here you can create the content that will be used within the module.

Spain: “We didn’t expect such a high demand for our blueberry calibrators” »   |   « Fruit Logistica 2018 in Berlin